Much like it is for many families, Thanksgiving is a time for the M&T community to gather, give thanks, and of course, feast! The Jerome Fisher M&T community is lucky to host its own Thanksgiving each year due to the generosity of AQR Capital Management. Current freshman, Aliris Tang (M&T, ’23), reflects on this favorite tradition. 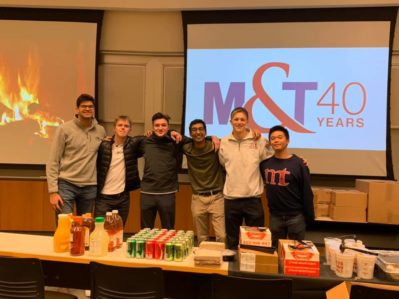 As Thanksgiving and the holiday season approached, the M&T community buzzed with excitement. For some, it was the thought of going home and spending time with their family; for others, it was simply the idea of relaxing for a couple of days before finals. But across the board, there was one event everyone was looking forward to – M&Thanksgiving!

Beginning in 2016, AQR has generously sponsored the M&T Board to host a Thanksgiving dinner, complete with great food, games, and giveaways. This event has quickly become a community favorite; even students who are normally too busy to attend events join in on this evening.

Walking into the room to set up, I was blown away by the amount of food in the room. In my mind, I wondered, will we really need this much food? But as people began filtering in and lining up for food, the answer became a resounding “yes”. 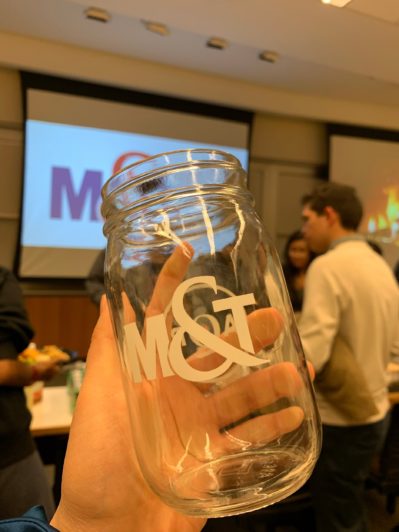 Friends from the freshmen class came, upperclassmen I’d met in the office were there, our beloved director Gad Allon dropped by (upon which he was immediately swarmed with students, discussing everything from their startup ideas to personal life), and even an alum passing through town came in. But besides the many familiar faces, there were plenty of people who I’d never seen or met before.

After people grabbed food and settled down to eat, we started the final part of the M&Thanksgiving tradition: Quizzo! Throughout this friendly – but intense – game of trivia, confused looks, conversation, and plenty of laughter was exchanged.

As a freshman, I had no idea what to expect; to some extent, I thought of it as another free-food event. But after experiencing it, I understand that the M&Thanksgiving is truly a tradition that holds a special place within the M&T community. No other event brings this many students (and occasional alums) together, and serves as a reminder of the special community we’re all a part of.

I’m so glad to have been a part of it the M&Thanksgiving year, and look forward to continuing this tradition in the future! 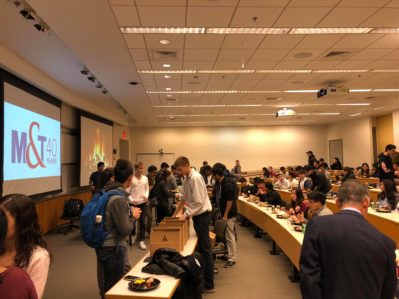 Aliris Tang is a member of the Student Board and part of the Class of 2023. She is studying Computer Science in Engineering and is deciding between Business Analytics, OIDD, and Management on the Wharton side. After graduation, she hopes to be a part of the startup scene domestically, or abroad.