Jerome Fisher M&T students have a variety of experiences here at Penn, including getting the chance to travel the world with the study abroad opportunities through Penn Abroad. We asked Andrew Cui (M&T, ’20) to share about his time studying at the London School of Economics in London, England. 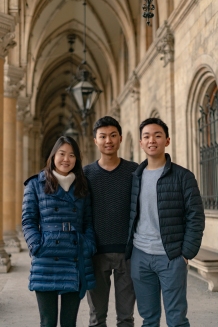 Andrew (right) at the Vienna Town Hall with Friends

Halfway through my time at Penn, I started searching for something new out of my college years. Don’t get me wrong — I love M&T, the community, and the doors it opens — but as with any incumbency, I wasn’t satisfied with just doing Penn the “same old way” for the next two years.

That spring, I found myself drawn to the behavioral economics and sociology perspectives in my marketing, communication, and international relations courses. I also realized that, although Penn has so much to offer, I wanted an international experience – to not only hear about but see more of the world. So, when the London School of Economics (LSE) opened an exchange with Wharton, I saw a place offering both of those experiences together (and a place where I would do ok with my rudimentary foreign language abilities!).

Taking My Studies Across the Pond

Here in London, I live with my friend and fellow Wharton-LSE student Varun in an apartment in the financial district, as semester students at LSE aren’t given on-campus housing. The school system is a sharp contrast from Penn. Instead of class multiple times a day and biweekly assignments (thanks, CIS classes!) I have one to two sessions weekly of a lecture and recitation per course. Three of my four classes are graded solely on summative essays due in April.

Although British students don’t get the same flexibility for electives, I got lucky to register for decision science, analytics, and two organizational-behavior courses. LSE’s focus on social-science foundations leads to a greater emphasis on psychology and behavior, even at the first-year level. Many of my classmates are international students, full-time at LSE, hailing from around the world. They bring diverse backgrounds and contribute to a language heterogeneity that renders my clearly American English a little less strange. 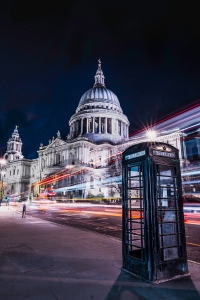 I am guilty of the exchange student stereotype, traveling around Europe every chance I get. I’ve seen parts of Europe full of history and culture from before I can imagine, from the Habsburgs’ Schonbrunn Palace (1600s) to St. Stephen’s Cathedral (1160), the Tower of London (1078), and the Prime Meridian. And I’ve pursued my passion for photography, learning to shoot and edit better each day. Flying around Europe gets exhausting, especially coming back to classes after, but I’ve felt free and happy an ocean away.

Studying Abroad as a Dual-Degree Student

Fitting in my exchange program to the M&T curriculum wasn’t easy. I had to overload courses in the fall semester to finish requirements while giving up a second concentration and my submatriculation hopes. The tradeoff made me a bit hesitant to apply, but I now know I made the right choice. I can get a master’s down the road, but the chance to spend a semester abroad ends at graduation – when I have to start work and be a “real adult” scarily soon.

Breaking out of the Penn bubble was a bold decision to make, no doubt. I’m not sure if I would’ve chosen to do so even seven out of ten times — the fear of FOMO and being in a new, unfamiliar place is a lot to face. But, while I’ll admit it might be a bit of confirmation bias, I’m glad that fear didn’t translate to regret. I am where I should be right now, sending a message from all the way across the pond.

Andrew Cui is a member of the Class of 2020 studying computer science and statistics. He has been involved in Asian Pacific American Heritage Week, MUSE Consulting, and TA-ing for CIS 545. He enjoys photography (@andrewcui22), running and cheering on the New York Yankees. His favorite part of the Jerome Fisher Program is the tight community that brings together older and younger students alike.