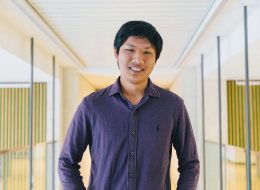 Throughout school, I was always fascinated with mathematics and how it could be applied to the real world. This led to my interest in pursuing studies in engineering. However, I knew I wanted to be more than an engineer, I wanted to be an innovator and entrepreneur – one who could turn moonshot ideas into reality.

M&T has allowed me to build up strong fundamentals on the technical side while gaining a firm understanding of business principles. I have an in robotics, automotive, clean energy, and smart homes and find I need both these skills to break into these industries. The engineering and business combination offered by M&T is perfect for anyone interested in starting their own company or being in the entrepreneurial space, regardless of industry.

I founded the Green Energy Innovation Club where we built our school’s energy dashboard, created an award-winning green gym design, pitched for solar panels on local schools, and hosted a speaker night with local environmental leaders like Professor Mark Jacobson. I was also captain of the math team and led the math circle, French club, and Science Olympiad team in while playing varsity tennis.

Outside of school, I was a research assistant at Stanford and UC Berkeley where I worked on autonomous space systems and optoelectronics respectively. I was also a conservatory-trained musician, having performed piano at Carnegie Hall and in Paris and Austrian music festivals, as well as served as a violinist and violist for local orchestras.

CIS 560. I decided to take my first graduate-level computer science class my sophomore year spring despite warnings that this course was notoriously difficult. Through this project-intensive course, I was introduced to the principles of computer graphics. I created an image editing toolbox, 3D linear algebra library, rasterizer for scene rendering, GUI for image processing, and a ray tracer as my final project.

I especially enjoyed how our instructor, Dr. Benedict Brown, was adamant that we learn the mathematical underpinnings behind the concepts and gain a strong foundation in C++. What amazed me the most was how much math, code, and effort goes behind rendering a simple scene of shapes. This course opened me up to a whole field I wasn’t initially interested in! But now, especially seeing how drastically graphics in films, games, and entertainment have improved over the years, I’m excited to learn more.

I’ve really grown to enjoy the environment here at Penn – particularly noticing how every student is so determined to reach their goals and always willing to meet new people, try new things, and enjoy the simple joys of life. I’ve dedicated a lot of my time outside of academics to clubs in the entrepreneurial space so I can meet like-minded people, explore new technologies, and learn about strategies and tactics in ventures. I especially enjoy attending the many talks on campus from leaders and innovators in every field, going on food adventures with my friends, spending hours at art exhibitions, and exploring the hidden gems of Philly. Check out my Instagram (@quinnlwu) to see all the amazing place I’ve been!

I still recall that, shortly after my acceptance into the M&T program, I received dozens of emails from current M&T students and met with several alumni. I was impressed by the community and wondered if it would be similar once I was on campus. It was that and more!

Freshman year, nearly all of us M&Ts lived together in Ware College House. We bonded as a cohort and some of my closest friends are also M&Ts. Entering my junior year, it’s been crazy to consistently see fellow M&Ts in my courses and working with me in clubs, research, and even internships. And the M&T Staff are always so supportive. (M&T Director) Gad, (Administrative Director) January and the rest of the staff have been a huge help in everything from academic planning to career advice and social events bringing the whole M&T community together.

I run several entrepreneurial competitions on campus. I’m head of outreach for the PennApps hackathon, chair of Weiss Tech House’s Pennvention tech innovation competition, and campus director for the Hult Prize at Pennsocial entrepreneurship accelerator. I’ve also been highly involved in the GRASP Lab, having done research for the Vijay Kumar Lab the past two years and competed with the UPennalizers RoboCup team. Recently, I joined the newly formed Penn Blockchain Club as a development team member.

The summer after my sophomore year is definitely my favorite experience so far. I am currently studying and working in Essen, Germany as part of the Ruhr Fellowship. Along with 16 other students from the US, we spent the first month taking a German language course, visiting companies in the Ruhr area (including going down a coal mine!), seeing the local universities and their labs, attending several CEO talks, and just getting acquainted with German culture.

In the second month, I was paired to intern for Innogy, a leading renewable energy company in Germany, where I developed an analytics dashboard for their retail department’s innovation team. The project, called Moonshot, aims to develop a fully functional energy supplier ten times cheaper than current models by automating customer service processes through a streamlined learning ChatBot mobile app.

During my brief stay, I’ve learned a great deal about the differences between Germany’s energy provider market, work culture, and digitalization focus compared to the US. I also met many colleagues who are also passionate about revolutionizing the oft-overlooked energy industry. Like everyone else, I’ve also attempted to make the most of my weekends traveling all over Germany, sampling the protein-heavy German diet in local pubs.

Philly has quickly grown to be one of my favorite cities in the world. Its diversity and spirit are remarkable. It’s amazing how walkable, manageable, and comfortable it is despite being one of the largest cities in the US. I especially love how you can walk into a different neighborhood and feel like you’re in a different city: colonial Old City, food-crazy South Philly, hipster Fishtown, yuppie Rittenhouse, soulful West Philly, and of course University City with the student vibes.

There is also an incredible food scene! From the top-notch restaurants to cheap food trucks and infinite brunch spots, Philly never fails to impress for any cuisine. As an admirer of art, Philly is also renowned for its several art museums like the Barnes Foundation and the thousands of murals scattered across the city earning its reputation as the “City of Murals”. Finally, Philly’s location is perfect for day trips to NYC and DC along with escapes to the Jersey Shore or the Poconos.